Thalassemia and MDS are both rare diseases that prevent a person from producing enough healthy red blood cells. Low levels of healthy red blood cells, known as anemia, result in less oxygen being delivered to different parts of the body. This can cause symptoms such as excessive tiredness and weakness. It can also lead to other serious health problems, such as heart disease.

People living with thalassemia or MDS can also store too much iron in their bodies, leading to a phenomenon called ‘iron overload’, which damages organs such as the heart and liver. Both conditions are typically treated with regular blood transfusions, which add to the problem of iron overload.

Iron chelation therapy removes excess iron from the body using special medicines. While it helps reduce the amount of iron in the blood for people with thalassemia or MDS, it does not treat the underlying cause of the condition or stop it from progressing. There is, therefore, a need for therapies that directly address the biological drivers of disease.

About SLN124 and the GEMINI II study

SLN124 is a gene ‘silencing’ therapy – one that is designed to temporarily block a specific gene’s message that would otherwise trigger an unwanted effect.

In this case, SLN124 aims to temporarily ‘silence’ TMPRSS6, a gene that prevents the liver from producing a particular hormone that controls iron levels in the body – hepcidin. As hepcidin increases, it is hoped that iron levels in the blood will decrease, which could in turn allow more healthy red blood cells to be produced, thereby improving anemia.

In preclinical studies, SLN124 has shown positive effects on improving levels of red blood cells and reducing harmful iron levels.
SLN124 is now being studied in the GEMINI clinical trial program. GEMINI II is a phase 1 study to investigate the effects of SLN124 in people with thalassemia or myelodysplastic syndrome (MDS), whose bodies produce fewer healthy red blood cells than normal and who can store too much iron in their bodies.

Silence Therapeutics is developing a new generation of medicines by harnessing the body's natural mechanism of RNA interference, or RNAi, to inhibit the expression of specific target genes thought to play a role in the pathology of diseases with significant unmet need.

SLN124, an siRNA which targets TMPRSS6, is in development for the treatment of iron-loading anemia conditions, thalassemia and myelodysplastic syndrome (MDS).

Initial data from the study showed all doses of SLN124 were generally well-tolerated with no serious or severe treatment emergent adverse events (TEAEs) or TEAEs leading to withdrawal. TEAEs did not appear to be dose dependent and the majority were mild, including transient injection site reactions which resolved without intervention.

Notably, up to an approximate four-fold increase in average hepcidin and 50% reduction in plasma iron levels were also observed after a single dose of SLN124. Effects on hepcidin and iron appear to be dose dependent and were still observed at the end of the 8-week study at all dose levels, indicating a sustained and long duration of action.

Silence Therapeutics expects to measure red blood cell production and effects on anemia in the ongoing GEMINI II phase 1 study of SLN124 in people with thalassemia and MDS, who unlike healthy volunteers have significantly elevated iron levels.

“These data represent the first clinical data from our mRNAi GOLD™ platform and underscore the promising potential for our technology to deliver precision medicines. We look forward to further data in patients anticipated from both of our wholly owned clinical programs later this year – the GEMINI II study of SLN124 for iron-loading anemia conditions and the APOLLO study of SLN360 for cardiovascular disease due to high lipoprotein(a).”

“Today’s results confirm the strong preclinical profile of SLN124 in humans – we observed excellent safety, robust gene knockdown expressed by up to an approximate four-fold increase in average hepcidin along with a 50% reduction in serum iron levels and a durable effect which lasted throughout the study. We are encouraged by these data in healthy volunteers and the opportunity for SLN124 to potentially address iron-loading anemia conditions such as thalassemia and MDS.” 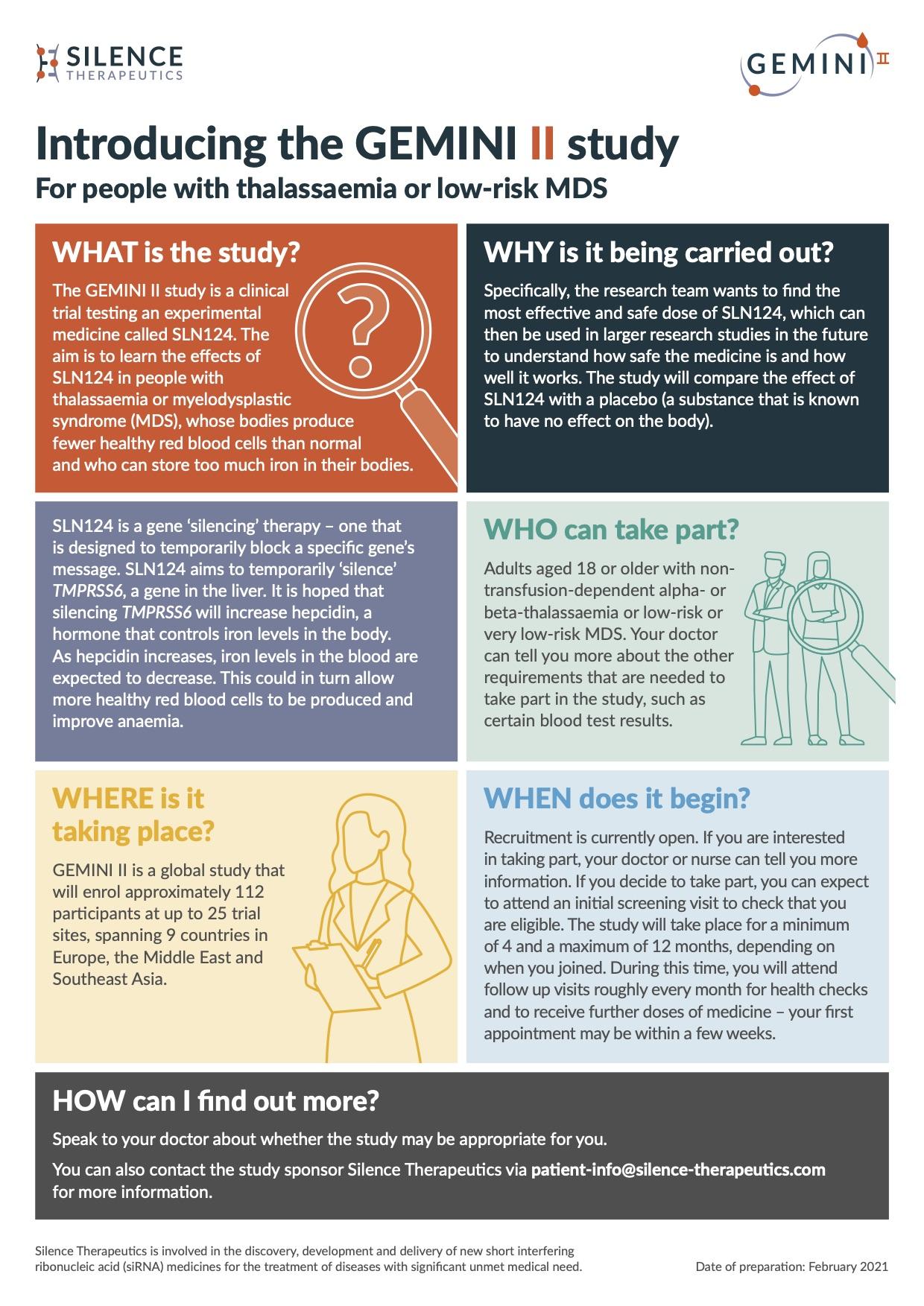 “Despite advances in our understanding of thalassemia and MDS, there are no existing treatments that specifically target the underlying mechanisms of these conditions as a way to improve the degree of anemia. There is a major unmet need for a therapy that can provide safe and continuous control of iron balance and distribution as a way to improve the efficiency of red cell production. I’m encouraged by data from the SLN124 study in healthy volunteers and look forward to further clinical testing.”

Run for us! Register for the Cabbage Patch 10 Mile Race