Home » How does Myelodysplastic Syndrome and its treatment impact on the Quality of Life of patients?

Myelodysplastic Syndromes (MDS) are a wide range of disorders which affect the functionality of the bone marrow. Thus, blood cells such as red blood cells, white blood cells and platelets may be affected. Low red blood cell (RBC) counts can lead to symptoms of anaemia such as fatigue and shortness of breath which can impact patients’ quality of life (QoL). The clinical management of MDS itself can impact on a patient's QoL.

This article will be concentrating on issues regarding red blood cells (RBC). Some categories of MDS patients are in need of supportive care in the form of RBC transfusions. However, these are associated with risks such as iron overload, infections and transfusion reactions. To assess the impact of MDS on QoL, we administered the QoL instrument QoL-e together with our survey. QoL-e(1) is a quality of life questionnaire used to assess the impact of MDS and its treatment on physical, functional, social, sexual and emotional wellbeing domains.

The aim of this article is to highlight the some of the specific issues relating to low RBC counts in MDS.

The clinical manifestation of MDS varies amongst patients. It ranges from mild and stable cytopenia (low number of mature blood cells) to severe deficiency in all blood cells and increased risk of progression to acute myeloid leukaemia (AML). The most common symptom is fatigue.

Based on MDS UK Patient survey:

Depending on the type and risk category of MDS, MDS can seriously affect the QoL of patients. 29% of MDS patients who took part in the survey indicated that they carry out their usual activities with only minor symptoms of MDS and none reported that they required special care and assistance or hospitalization. However, patients indicated the impact MDS had on their lives – 22% reported it ‘’takes an effort to engage in normal activities’’; 18% report they can’t perform active work; and an additional 6% and 8% reported that they required occasional and a considerable amount of assistance respectively (See Graph below).

Suffering from MDS causes a steady and persistent decrease in the functional ability of patients partially due to fatigue and this has a negative impact on QoL in a number of ways. Fatigue experienced in MDS patients is as a result of low haemoglobin levels due to anaemia and it could have an impact on the physical aspects of a patient’s life(2). The physical aspects of fatigue experienced by MDS patients is often associated with decreased strength, unusual tiredness and weakness, lack of energy and the persistent need to sleep or rest. This fatigue is usually not as a result of a recent strenuous activity and could affect the functional and cognitive ability of a patient. This can lead to early retirement or reduction in work hours for patients who are not of retirement age thus resulting in financial consequences for the patient and their family. Similarly, it can lead to restriction in daily activities, planning for the future and diminished independence for patients who are of retirement age.
Based on QoL-e scores(3), the majority of patients found it very difficult performing heavy activities and experienced added fatigue simply when carrying out daily activities.
When asked about the greatest challenge of having MDS, patients said:

'Chronic fatigue affects my day to day activities'
'I look too well to be ill and it is hard to explain the deep fatigue I feel'
'The fatigue and how it can impact on daily life some of the time. Finding it difficult to explain to people that the tiredness I feel is not the sort one might have in life in general'
'Sudden change in lifestyle from being fit and healthy to being restricted by fatigue and hospital visits'

Supportive care with red blood cell transfusions is usually the primary and standard management strategy particularly for patients with low-risk MDS based on the Revised International Prognostic Scoring System (IPSS-R)(4). MDS patients are usually anaemic at the time of their diagnosis and would rely on RBC transfusions to correct the symptoms at some point in their MDS journey.
Based on our survey:

How often RBC transfusion is given varies between patients; some need them as often as every week while others need regular transfusions every couple of months. Likewise, pattern or frequency of transfusion can change over the course of the disease. In the UK, patients are usually transfused when their haemoglobin level drops to 80 to 85 grams per litre of blood(5). However once a patient is transfused, the level of haemoglobin does not remain constant and is not long-lasting. Haemoglobin levels start to drop after being transfused thus the symptoms of anaemia resurfaces before the next transfusion is due. This leads to fluctuation in the energy levels of the patient hence affecting QoL. Based on our survey, red blood cell transfusion dependence (RBC-TD) at the time of the survey correlates with decreased or compromised abilities compared to red blood cell transfusion free (RBC-TF) patients (See graph below).

There are no set haemoglobin concentrations at which blood is transfused at. It is based on different individuals; this level will differ between patients depending on the presence of co- morbidities such as heart conditions(6). Therefore, haematologists need to assess the symptoms of a patient before deciding what level they should be transfused at. Also, new research is going on to assess whether MDS patients should be transfused restrictively or in a more liberal manner. It also aims to investigate whether transfusions at more frequent intervals could potentially reduce fluctuations in energy levels therefore improving QoL(7). Visit our page to get more information on a recently concluded trial (REDDS trial) which investigates this: https://mdspatientsupport.org.uk/redds-clinical-trial
The negative impact of MDS on a patient’s QoL can worsen as a result of the added efforts spent trying to cope with the disease such as repeated hospital visits for transfusions, waiting times as well as managing the side effects of transfusions.

These efforts could potentially use up the limited energy stores of a patient thus affecting their QoL. Regular visits to the hospital for transfusion can have a financial impact on households.

31% and 21% RBC-TD patients respectively reported that cost for hospital travel and car parking had an impact on their household budget.

Also, reliance on family members or friends for support can affect a patient’s independence thus resulting in additional concern and stress for some patients and their families. This is worse for patients who don’t benefit from any support network. Based on our survey:

Apart from the physical health issues caused by MDS, emotional impact of the disease can be problematic as a result of uncertainties associated with the disease. RBC-TD patients worried about MDS to a significant extent compared to RBC-TF patients and suffered a higher emotional burden (See graphs below). QoL-E scores(8) were significantly lower (worse QoL) in RBC-TD patients in all domains (physical, functional, social, sexual and emotional wellbeing). 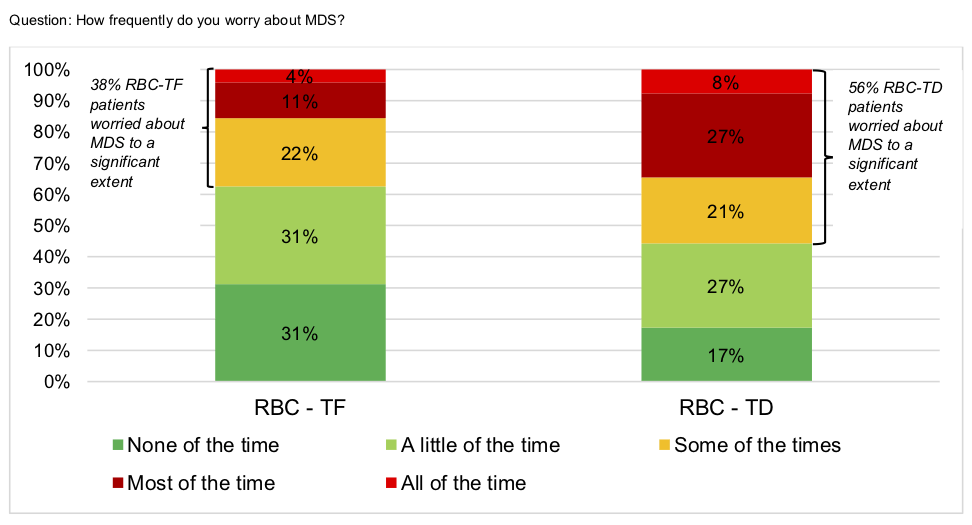 Transfusion dependent MDS patients have been found to have a lower QoL compared to transfusion free patients(9). Our survey also supports this statement; QoL-E scores were found to be significantly lower (worse QoL) in RBC-TD patients in all domains. This could be due to the fluctuations in haemoglobin and energy levels, transfusion reactions, infections or accumulation of iron in the body.
Based on the MDS UK survey:

Patients who are on long-term RBC transfusion are inevitably susceptible to developing iron overload. Increased amount of iron in the body results in the build-up of iron in various organs, in particular, the heart, liver, kidneys and endocrine organs thus leading to the continual deterioration of these organs. There are tests available to assess iron overload in a patient; the most common is a blood test called a Ferritin test. Iron chelation therapy is required to remove the excess iron in these patients and it is administered either via the Deferoxamine pump or oral tablet, Deferasirox (Exjade). Based on our survey:

Though iron chelators are administered to patients with iron overload, they can have side effects which can be challenging for patients. Common side effects are: body rash or hives, digestive problems, anaphylactic shock, swelling or lumps at the local infusion site to mention a few(10). Also, using the Deferoxamine pump can be inconvenient and uncomfortable for patients as they have to insert a needle into the stomach and wear the pump overnight. This can disrupt a patient’s sleep thus affecting their limited energy levels. Most side effects can be prevented or managed by working closely with the clinical staff. Discuss any symptoms you have developed after starting iron chelation therapy with your clinical team.

Below is a word cloud illustrating the most quoted words when patients were asked "What do you found to be the greatest challenge of your treatment for iron overload?"

QoL-e results relating to physical well-being matched these findings from the general part of our survey. As a result, patients have to navigate the health system, speak to different consultants and manage multiple health visits sometimes in different hospitals. In some cases, patients are forced to ensure that there is communication between the consultants in the same and/or different hospital departments. As a result, there is a need for physicians treating the other health issues to liaise and collaborate with haematologists in charge of MDS care. Thus, an overall treatment plan adjusted for other health issues can be developed for the patient.

The consequences of MDS can be debilitating thus affecting the physical abilities of a patient. Additional factors associated with multiple disease management such as side effects from treatments, travel time and regular hospital visits by MDS patients can further impact QoL. Therefore, it is important to offer these patients some increased support and a more coordinated/collaborative care so as to improve QoL.

The impact of MDS on emotional well-being can be challenging. This is usually due to uncertainties which can arise as a result of inadequate understanding of the disease, fear of potential disease progression therefore leading to anxiety and worry. Unfortunately, care and attention is sometimes too focused on patients physical problems associated with MDS. This is where the role of an MDS nurse and counsellor lies. The former helps patients understand MDS better, identify and assess any physical issues associated with MDS as well as help navigate through the complex health care system. The latter helps patients understand, reflect on and work through concerns and worries they may have thus potentially improving their QoL. Patient support groups are also an excellent source of reassurance for MDS patients.