In June 2015 I was diagnosed with MDS RCMD, it was something I had never heard of.

The only symptoms I had had up to the diagnosis was bad mouth ulcers, really big ones. This led my GP to run some blood tests which showed that my platelets and neutrophils were low. 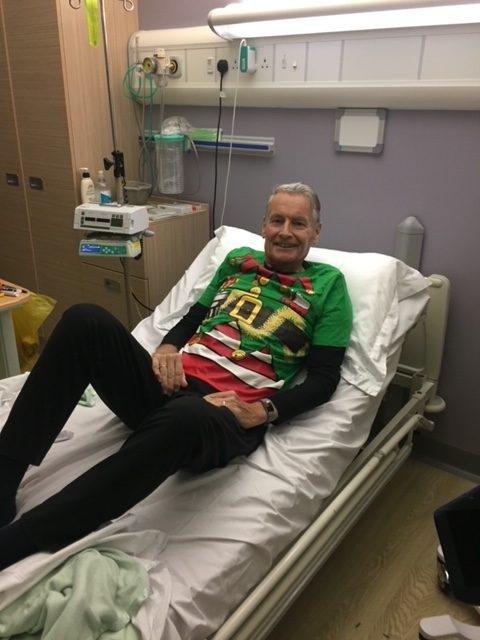 My blood counts slowly dropped over the following years and my fatigue and infections increased. As my neutrophils fell below an acceptable level in 2019 I began a course of regular GCSF Injections. These gave my neutrophils a boost.

However, during August and September 2020 my white cells started to increase really quickly, a bone marrow biopsy confirmed that the MDS had transposed into acute myeloid leukaemia.

On the 5th October 2020, after becoming really unwell & losing a lot of weight, I was admitted to ward 33 of the Freeman hospital at 8am. I was fitted with a Hickman in theatre at 1pm. I had my first dose of CPX chemotherapy at 7pm that evening, it would prove to be a very tough 5 1/2 weeks.

I had intensive CPX chemotherapy doses but I didn’t lose my hair- this time. There were a few ups but mainly downs such as infections, Neutropenic sepsis, joint pain, nausea , severe mouth ulcers, rashes &, shall we say, the unmentionable ‘toilet issues’.

Due to infections I had to have x-rays, scans & ultrasounds to check where these infections were. It was also the only time I was allowed out of the ward.

My blood counts were basically obliterated by the chemotherapy so the leukaemia cells could be killed off. Blood & platelet transfusions were a regular, almost daily thing. Throw in some intravenous antibiotics & fluid drips plus regular obs. It felt like I was always attached to a machine.

Covid:"Nurses, Drs, radiographers and staff on the ward were amazing, always there for you"

Covid brought its own set of challenges. A couple of times I had a cough and was almost immediately popped into an isolation cubicle until the Covid test came back, negative luckily. With these spells in isolation & visitor restrictions & it got to be a lonely place at times.

However I always felt cared for, I was surrounded with love, affection & care from my family & friends through cards, messages and social media. The nurses, Drs, radiographers & staff on the ward were amazing, always there for you no matter what was happening.

Also the BMS lab staff were always there to process samples, bloods & the regular covid tests.

I found I could cope with the physical side of being very ill, however the mental side was much harder. It was made harder still with covid restrictions on visitors, but at least I could have one nominated person, the hardest part was speaking to my daughter and son in law via the phone, through the window, whilst they stood in the rain on the car park. That really crushed my soul and spirit. However the nurses and Drs were always there with their unending support. I love them from the bottom of my heart. I cannot thank them enough.

"My preparations to have my stem cell transplant"

I came out of hospital on November 10th 2020. On the 16th November 2020 we met with the transplant team at the Freeman to discuss my preparation to have my stem cell transplant. During my stay in October we had spoken about my transplant and possible donors, they’d got several 9 out of 10 donors but had asked if my daughter, Aimée, could be tested to see if she could be a HAPLO match. I also signed the treatment consent forms and what seemed like a contract that I would finish the treatment.

The following day I had another bone marrow biopsy to ensure the CPX chemotherapy had killed off all the leukaemia cells.

On the 19th November Aimée had a medical to see if she was able to donate.

How to donate bone marrow

If you’re between 16 – 30 and in good health, sign up to Anthony Nolan's register and you could be a lifesaving match for someone with blood cancer

You Can Become a Donor!

Even if you’re older than 30 you can become a blood donor if you're in good health. Check your eligibility at the dkms site

Day by day, before and after Mark's stem cell transplant

On the 25th November we attended the Freeman for my “work up” chat. I had lots of bloods taken approx 14 vials, then spoke to the radiologist to talk through the risks of the total body irradiation, TBI (Editor's Note: TBI is a type of radiation therapy, given to the entire body. TBI is often used with high-dose anticancer drugs to help prepare a patient for a stem cell transplant) and to sign the consent forms.

Then it was the heart unit for an X-ray of my chest, next up was a lung function test, then across to another department for an ECG. After that it was off to the radiology department to be measured up for the TBI,they tattooed a small dot on my chest ready for when I would have the TBI. It was good to have my wife with me, it helped to process all the information we were being given.

On 27th November I had a new Hickman line fitted at the Royal Victoria Infirmary, RVI in Newcastle. All went to plan, it was a worry having it fitted but I knew it would be a blessing when I was going to have my treatment.

On the 28th November - 1st December Aimée had to go to the Freeman for GCSF injections to boost her cell counts and on the 2nd of December Aimée donated her cells, what a special thing to do. Aimée was very brave to go through the donation process.

I was re- admitted to ward 33 on the 4th December, this time to an isolation cubicle, cubicle 2. That evening I was given my first dose of chemotherapy, fludarabine and cyclophosphamide.

The following day, 5th December, I had my 2nd dose of chemotherapy, however this time I had a reaction to the cyclophosphamide so they slowed down the drip rate and gave me an antihistamine.

I had my 3rd dose on the 6th December, this time just the fludarabine. The following day, 7th December I had my 4th dose of fluradarabine chemotherapy, I was now starting to feel nauseous, however I hadn’t been sick.

The next day I had my 5th dose of fluradarabine chemotherapy, I was starting to feel quite unwell.

On the following day, 9th December, I was taken down for the total body irradiation, 8am sharp. I was placed on the top of what appeared to be a bunk bed. I then had extremely cold Vaseline packs packed around me. I was irradiated on one side then they turned the bunk bed around and they did my other side.

When I got back to the ward I was completely shattered, I slept all the rest of the day and night.

10th December and it was transplant day, finally I got to receive the cells Aimée donated, well some of them anyway. Some are kept aside in case I need a top up.

The transplant went ok, it was just like having a blood transfusion. The CNS transplant nurse was with me, also a chap from the labs from the RVi who had brought over Aimee’s cells in the deep freeze pod unit.

The following two days I was completely wiped out, I was hardly able to get out of bed.

During the following weeks, I also got a small bleed behind my eye, I had to go to the eye department at the Freeman. The bleed was due to my platelets being so low, at one point they were just 12. I needed quite a few platelet transfusions to ensure my platelets were kept at 50.

I also lost my hair due to the chemotherapy, for some strange reason it didn’t bother me. I got further infections but the staff were onto them very quickly with intravenous antibiotics. The staff were absolutely wonderful, always there for me, their professionalism was first class. I don’t know where I would have been without them.

On the 13th & 14th December I had a further two doses of cyclophosphamide chemotherapy. During this period I managed to get an E. coli infection and my temperature spiked to 38.5. I felt terrible.

On the 15th I started on the anti rejection drugs, Tacrolimus. 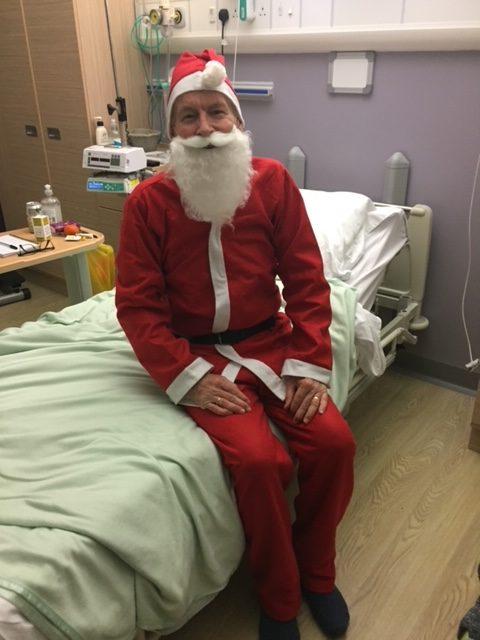 On Christmas Eve morning I dressed up as Santa, stepped out of my cubicle and just said ho, ho, ho, it really brought a smile to all the nurses at the nurses station. It was shift change over, so they were all there. I felt awful really unwell but I was determined to do it. Just for them.

I was in isolation for approx 5 weeks, I spent both Christmas and New Year in cubicle 2. I came out of hospital On the 6th January 2021, it was such a relief to come out but there was still a long journey ahead. That’s for another time.

I’d kept a journal of my time in hospital and my continuing journey afterwards, it often saved my sanity to be able to download all my feelings onto paper. I could cope with the physical side of being ill, however the mental health side is just as difficult to get through, perhaps even harder.

Our story by Debbie Hickman: “Neil met some incredible people on his journey, and developed new levels of patience, resilience and humility”

Stephen Andrews: “I am looking forward to getting my new set of Covid jabs”

Simon Wilkes: “Hopefully so many lives will be saved!”

Kate, with MDS RA-RS, determined to keep fit and healthy!