Home » Stories » Joseph Vella: His experience with azacitidine and stem cell transplant at the age of 63

“I hope and trust that my little story would encourage other MDS sufferers to decide to go through with the treatment. It was proved that even patients who are more than 60 yrs. old can benefit from Bone Marrow Transplant. The reduced regime used to treat me has been quite successful. It is not as stressful as the full regime I believe.”

I would like to introduce myself. My name is Joseph Vella. I am a medical practitioner by profession and now I am 66 years old. I am of Mediterranean ethnicity — I come from Malta. However, nowadays I spend long periods in Britain, at my home in Bury St Edmunds.

I started feeling very tired and I could not enjoy wine. It had a particular, nasty taste

At 62, four years ago, in March 2010, my wife and I went to Mexico for a few days. We returned to Southampton on a transatlantic cruise from Miami.

I started feeling very tired during the cruise. I could not keep awake during the daily after-dinner show. Also, during dinner, I could not enjoy wine. It had a particular, nasty taste. I kept ordering finer wines but to no avail. On one occasion I tried swimming in the pool but I almost drowned. Usually I am a strong swimmer but I almost did not manage to get from one end of the pool to the other (only about 10M).
Something was definitely very wrong with me.

I knew that I had been bitten by some insect while I was in Mexico, and that I ran a mild temperature for a couple of days.  However I was well again when we boarded ship.
Eventually we landed at Southampton and my wife and I went to stay for a few days at my daughter’s house in Waltham Abbey. I was still feeling very tired and found that I could only negotiate two storeys of steps with difficulty. I kept on believing that it was some tropical disease I contracted in Mexico.
My wife and I went to Malta, and I had some blood tests done. To my surprise, my Haemoglobin level was down to 10.1 g/dl.  Platelet count and White Blood Cells count were both down. A blood smear showed blast cells. A bone marrow biopsy confirmed MDS with 10% leukaemia cells. 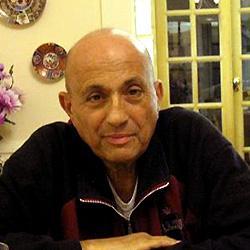 My daughter is a doctor and was being trained in a subspecialty at King’s. Seeing that the world expert on MDS was Prof. G.J.Mufti, based at Kings I asked my daughter to make an appointment  with him. In fact I was seen by Prof. just three days after the diagnosis was established.
Apparently, the protocol at the time was that people over 60 years of age should only be given palliative treatment. However Prof. agreed that I should undergo several tests to establish whether I was fit enough to be given the full treatment with a view to Bone Marrow Transplant in the future.

I proved to be healthy enough, and was started on 5-Azacitidine inj. daily for one week. Ten days after I finished my first course, fever came back with a vengeance. The insect bite disease came to the fore. My body temperature was oscillating between 102 and 104 degrees F. This was accompanied by a very severe cough, a generalised body rash and grossly swollen legs  which were excruciatingly painful when I tried to walk.  I was admitted  for treatment but no antibiotics seemed to help. After about three weeks on Davidson Ward with no improvement in sight, I despaired of living and asked for the treatment to be stopped so the disease could take its natural course. I was talked out of this attitude by Prof. himself (and thank God I obeyed). All blood cultures proved negative, even when taken during the rigors.  So an intracellular bug was postulated. In fact I was started on Doxicycline and within five days I was fine and discharged home.

Treatment with 5-Azacitidine was, eventually, resumed and by September 2010 my MDS was in full remission and I was deemed ready for a Bone Marrow Transplant.

My experience with Bone Marrow Transplant

Unfortunately no match was found for me in the International Bone Marrow Donor database.  I only had one sibling, a younger sister, who a few years previously had suffered an intracranial haemorrhage from a Berry Aneurysm.  I could not upset her  with a request to be tested for a possible match.  All my family was tested and, fortunately, both my daughters proved to be mine!  Prof. suggested that bone marrow from one of them be transplanted, a technique that was being perfected. In view of the length of time I was expected to be under treatment and eventual observation I bought a house in England.
A haploid (half match) transplant was scheduled for 19th January 2011, following a reduced regime of induction, a Mini Transplant because of my age.  A couple of days after the transplant I developed explosive diarrhoea, which took a long time to be brought under control. I experienced several early complications like Graft Versus Host Disease of the skin, including my scalp and face, and neuritis of the soles of my feet. Other later complications were a lung infection with PCP, and Herpes Zoster of my left eye. These were all controlled by the team of doctors at Kings.
The only problem at the time (and to date) seemed to be that, though my white cell counts and platelets were at an acceptable level, my Haemoglobin level kept going down, necessitating repeated transfusion. I was started on Darbopoietin Injections with very good effect. The Hb. level is kept swinging between 110.g/dl and 13.5g/dl in between injections, a level I have to keep as otherwise I get chest pain on exertion if it goes down below 11g/dl ( I had a quadruple coronary bypass in year 2000).

In the meantime I was allowed to go on holiday to Malta on several occasions. Three years after the transplant I started to holiday for longer periods and, now, I no longer have to go for follow-up every 15 days. Follow up is every three months.

Been through hell and back but it was worth it

Looking back I know that I have been through hell and back but it was worth it. I am now healthy and look forward to the rest of my life with optimism. I have been supported by my wife through it all, and I know that she has passed through her own private hell. She was a brilliant support for my morale, though, in truth, she does tend to nag a bit too much! I know I would never have made it without her support.

I thank all the Staff at Haematology at Kings for their support and understanding. I know, through my own experience, that they can be trusted fully to go beyond the proverbial mile to get the desired results.

I hope and trust that my little story could encourage other MDS sufferers to decide to go through with the treatment. It was proved that even patients who are more than 60 yrs. old can benefit from stem cell transplant. The reduced regime used to treat me has been quite successful. It is not as stressful as the full regime I believe.

Will McGookin: MDS diagnosis and his interview with Sky News

Graham Cheyne: “My CMML may give insight into a way forward in treatment”

Kevin’s Story: at 70, with MDS, and an avid adventure cyclist

Kes Grant tells us how it feels to live with MDS

Fiona Cherry MDS story: My journey to a diagnosis