This book was originally destined for family and close friends, but the reaction has been such that it might find a wider readership.

To this end, together with my wife Lin, I decided to print a further number of copies to be sold as a donation to the MDS UK Patient Support Group as my small contribution towards their fundraising.

I am not an author and I have never had any help or guidance in writing this work, so it may seem very unpolished to some.

Stay with it. Enjoy the journey.

Listen to the first excerpt of Ron Holder's "Twice a Refugee"

This 1st reading from Ron’s book describes his elation on the last day of his school life, after being in a boarding school since the age of 4 ½ years of age. Ron with his family, at 9 years of age. His parents returned to the UK on furlough from China

At long last the great day arrived and my last day at school, I was finally to be set free. The old school song still comes to mind:

This time next week where will I be,

Out the gates of misery,

No more Latin, No more French,

No more sitting on a hard-old bench.

The last day was quite memorable, the day started as usual, but I refused to comply with the morning prayers, the housemaster Mr Ridges did try to enforce the rules, but this had no effect on me. Today was my last day at the hated place and by 2 p.m. I would be on the train and away forever. The school bell went at 9 a.m. but we did not file as usual to the morning service, we hung around our classrooms tidying our desks, I binned all my text books and anything else that would remind me of school. The previous night I had cleared out my locker in our common room. In the days leading up to the end of term the staff had packed all are clothes along with anything we wished to keep, and our trunks had been sent on by rail. Mine to my Aunt Joan’s in Putney, where my parents were living during their furlough. Father could not collect me as he was in Belgium studying French.

At 11.00hrs the whole school assembled in the gym for final assembly on this the last day of the school year. This was the only time the whole school was combined; there was not enough room for seats so we all stood in rows in our class groups. The headmaster and head mistress proceeded to go through the year’s achievements and present the cups for the top ‘house’ to the house captains. This was a cup that was awarded for the most successful house in all disciplines for the whole year. Each sport has its own individual cup or trophy and each had a score for first and second place, each term had a work shield and an overall shield for the year. Pupils could acquire plus or minus ‘work’ points for their house by good or bad behaviour or good or poor academic results in lessons or exams. The house system had always been the big incentive to perform to your best ability so as not to let your house down.

I was singled out as an example of a school record breaker, I had gained zero in my French examination, after three years’ study, and this attracted ten minus points. However, I did attain 100% in RK (Religious Knowledge) and this attracted 10 plus points. I had also accumulated the most minus points overall of any pupil in a school year. Well done me, and I did not give a toss. Our ‘house’ still won every sports trophy; cricket, basketball, rugby and athletics for the third year running. These together with the work shields ensured we yet again were overall ‘top house’. My house captain was head boy Claude Scott, the older brother of Bernard. A few years ago, I was idly scanning through Facebook and put Claude’s name into a search, up popped a face I recognized. The note stated that Claude was now retired having been the head of a secondary school in Norwich.

I was free at last!

This was the end of my school days, the supposed ‘best days of my life’. A time when I should have been set up for my future life and I should have at least had some idea of what I intended to do to make a living, but I had absolutely no idea. I had wasted a golden opportunity as academically this school was brilliant. Had I attended as a day pupil; things may well have turned out very differently. 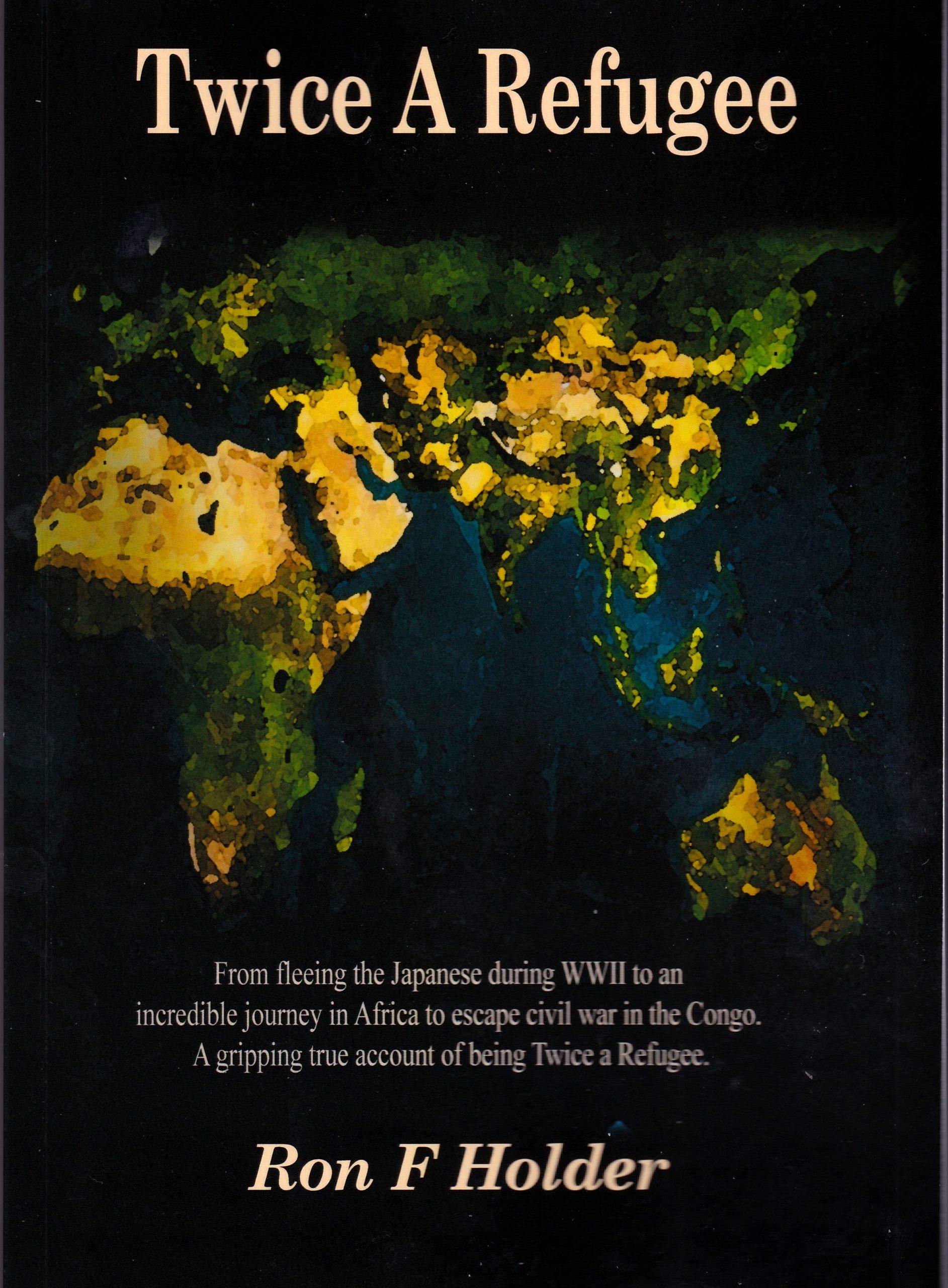 “Twice A Refugee” - an extraordinary book by Ron Holder, tells his gripping, factual account of being a refugee twice in his life. The incredible, poignant social history is testament to Ron's strong character and self-belief.

Ron was born to devout Christian missionary parents in China during WWII. The family fled the advancing Japanese army by flying over the Himalayas in an unpressurised cargo plane by the US Airforce, arriving in India as refugees. Placed in a boarding school at age just 4 1/2 so his parents could continue their missionary work in China, his childhood became one of bitterness and resentment.

At just 15, Ron was taken to The Belgian Congo to learn about his parents' religious devotion and commitment. 4 years of adventure, which culminated in The Congo's Independence and its descent into civil war, resulted in Ron becoming a refugee again. These years of self-reliance equipped Ron better than any academic qualification could have.

Both Ron's loving wife Lin and MDS UK hope you enjoy this remarkable story as much as Ron enjoyed writing it. It really is a wonderful read, and a bargain at £12.00 plus P+P!

To order your copy:

You can of course also donate without purchasing the book if you wish! Many thanks if you choose to do so

MDS UK is the only charity solely dedicated to helping those with Myelodysplastic Syndromes and their loved ones through pioneering research, a helpline, specialist speakers and more. We are a small charity that needs your support!

MDS is a blood cancer and bone marrow failure disease. Approx 2500 patients are diagnosed every year with MDS in the UK. The causes are mostly unknown and the average age at diagnosis is around 74 years old. Aplastic Anaemia shares features of this disease, but can affect patients at much younger ages too. Symptoms of severe unusual fatigue or repeated odd blood counts results are some of the signs to watch out for, and require further investigation by haematologists. Please always consult your GP in good time.
More information on MDS and ways to contribute: www.mdspatientsupport.org.uk

MDS UK would like to thank Ron Holder, who was determined to raise vital funds for us despite his illness. You’re an inspiration and are sorely missed! We would also like to thank Lin for helping to publish the book and for remaining a vital part of our fundraising community.