Home » What is CAR-T cell therapy? Learn how this immunotherapy works in blood cancer

One approach that’s been pioneered by Memorial Sloan Kettering researchers, led by investigator Michel Sadelain, is called CAR-T cell immunotherapy. This type of targeted immunotherapy aims to boost the immune system by giving immune cells the information they need to better recognize tumor cells as foreign and attack them.

How does Car-t therapy work in blood cancer?

The technique involves filtering white blood cells called T cells from a patient’s blood and introducing a new gene into those cells. A disabled virus called a vector is used to carry this new gene inside the T cells and insert it into the cells’ genomes.

The gene programs the T cells to make a chimeric antigen receptor (CAR), which enables them to recognize a specific protein that’s present in cancer cells. These CAR-T cells are then grown in the laboratory and infused back into the patient, where they seek out and destroy the cancer.

CAR T cell therapy is currently being evaluated in the clinic at MSK for certain types of leukemia and lymphoma.

In this approach, T cells are genetically engineered to recognize a protein called CD19, which is found on the surface of blood cells called B cells.

In the largest study reported so far, for adult patients with B cell acute lymphoblastic leukemia — a rapidly progressing form of blood cancer — a report published by MSK researchers last year found that 88 percent of patients responded to the therapy.

In late 2014, the US Food and Drug Administration granted MSK Breakthrough Therapy Designation for its CD19 CAR therapy. In August 2017 the FDA approved a Novartis Car-t therapy, called Kymriah (tisagenlecleucel), for children and adults up to age 25 with B cell who have not responded to conventional therapy or who have relapsed. In October 2017 it approved Yescarta (Axicabtagene Ciloleucel), another cell-based gene therapy, to treat adult patients with certain types of large B-cell lymphoma who have not responded to or who have relapsed after at least two other kinds of treatment. Yescarta, a CAR-T cell therapy, was the second gene therapy approved by the FDA. 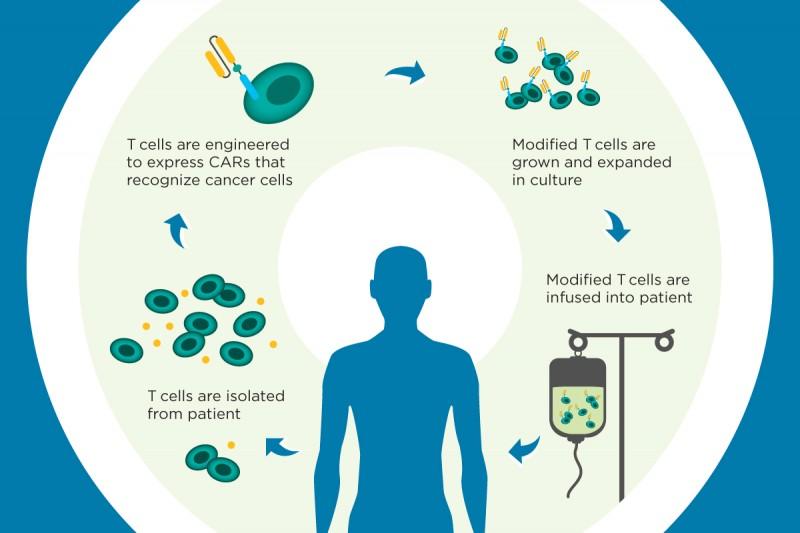 The science behind it

Now have a look at this graphic story, courtesy of the CLL Society: